The Ridgeway Relay takes place annually, generally on a Sunday in June, usually on Father’s Day. As the name suggests, the relay is run over the length of the Ridgeway – 87 miles of stunning countryside, following the route of one of Britain’s oldest roads. It starts at Ivinghoe Beacon, Buckinghamshire and finishes in Marlborough, Wiltshire, passing through south Oxfordshire on its way.

The race is run in teams of ten, with legs varying from 5.4 to 11 miles, and around 40 teams take part. Men’s teams must include two women and vice versa for women’s teams. The route is predominantly off-road and very little of it is flat!

We try to put out one competitive team every year – HRR has finished in the top three for the past ten years and won it in 2013 and 2014. But it’s also a great day out for runners of all abilities, and we enter multiple teams so that everyone who wants to can get involved. 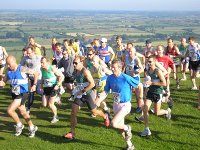